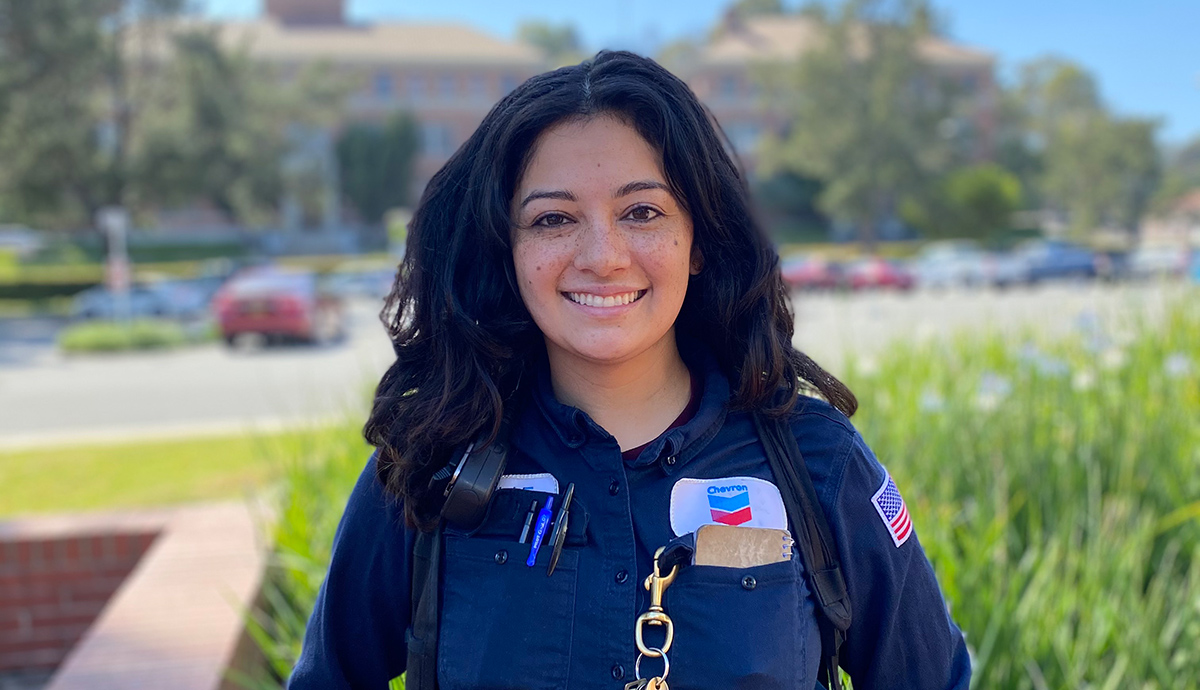 Entering a career traditionally dominated by men can be intimidating for any woman, says Elvira Figueroa. Thankfully, Figueroa is not easily intimidated. The native of Richmond, who is thriving as an operator at the Chevron Richmond Refinery, attributes this strength to her mother.

“My mother always instilled in me to be very independent, and very strong,” Figueroa said. “From a very young age, she always put education first, and always encouraged me to be able to support myself.”

Before starting her career at Chevron, Figueroa worked various jobs including in retail, dog-grooming and even as a delivery driver for Burger King. In the spring of 2016, she joined the free Regional Occupational Program (ROP), which trains local residents in lucrative industrial careers. The program would lead to her current role as an operator at the Richmond Refinery.

The job checks many boxes for Figueroa – the career matches her interests, challenges her, and she enjoys working outdoors while being able to remain within her community and close to her family.

One of the biggest challenges, Figueroa said, was coming into a field knowing she’d have far more male than female colleagues.

“You kind of have to prepare yourself for that,” she said. “I feel like there are a lot of negative and false stereotypes about women working in refineries. Coming into here my goal was to prove that those were false, that regardless of your gender, or how you were born, you can work just as well as anyone else out here.”

Figueroa liked the challenge, “I want to prove that not only can I do the work, but that I can thrive and be successful as well.”

Today, Figueroa is accomplishing those goals while also seeing a gradual widening of the pathway for women in the field. More facilities geared toward women are being installed at refineries and other industrial workplaces, such as women locker rooms, she said.

“I want to prove that not only can I do the work, but that I can thrive and be successful as well.”

“Knowing that Chevron is taking the right steps to create a more inclusive environment for women is something that really excites me,” she said. “I want to continue to push for that and help others have the same opportunities that I’ve had.”

Figueroa is also sharing her experience, and advice as well, in order to help break down barriers to women in her field. The advice she would have given to her younger self, she said, is to be proactive about learning, and to not be so hard on yourself.

“Don’t be afraid to ask for help when you need it,” she said, adding that seeking advice from colleagues developed a support system to help her grow in the field. “I think that was the biggest thing for me.”

Along with hard work and a willingness to learn, being flexible about your goals is important as well.

“We have pressures put on us to have a particular life plan; go to college, accomplish goals by a certain age, and we end up burning out, and feeling like a failure,” said Figueroa, who also happens to be finishing her college degree while working as a full-time operator. “It’s good to have goals but if it doesn’t work out, life works itself out.”

Such realizations make Figueroa optimistic about her future as well as the futures of professional women.

“I think especially with how far we’ve progressed in society, it’s so integral that more women feel included and invited to come into the workplace,” she said. “It’s important that they feel safe to come into here, and confident knowing that this job isn’t just for men and anyone can succeed here.”

Figueroa is a clear symbol of that progress.

Read more about the women of Chevron Richmond